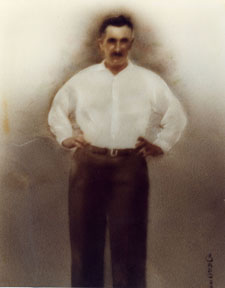 The first Oddenino to arrive in America was Giuseppe Domenico Felipe Oddenino. Giuseppe was born on August 23, 1831 in Chieri near Torino, Italy. His family owned and operated a linen factory in Chieri. Family stories passed down suggest that his first love was art and that he felt in America he could pursue a career in art without the social limitations he experienced in Italy as his family's social status did not look kindly on lowly artists. He left his wife Celina and son Luigi to pursue his dreams.

He arrived in New York in March of 1862 in time to enlist in the Union Army during the Civil War. His Civil War records reflect that he was in Company B, 5th Regiment of the New York Heavy Artillery. New York In The War of Rebellion (1912) by Frederick Phisterer indicates that while the company saw action in a number of engagements the majority of the unit and the majority of the time was involved in garrison duty, especially in the Washington, D.C. area. Civil War pension records indicate that Joseph, as he was known in America, was on detached duty with the regimental band on June 20, 1864. Joseph's Civil War records are set forth below, but first let's take a look at the art work he did and the various stories on that art.

Click here for a look at the historical events that took place during Joseph's life.

Here is a map of central Virginia with the Madison and Aroda areas highlighted in yellow:

Family reports are that he worked giving music lessons (which is consistent with his service in the regimental band during the Civil War) and more famously as a "hobo artist." Where the "hobo" comes from we cannot say but he definitely worked as an artist. He painted the Hebron Lutheran Church, in 1885. It took him one year and he was paid $1,000.00. It is thought he did the six panels while the two remaining ones on either side of the pulpit are thought to be imitations of Joseph’s work. Roy Crigler, then a child of age six or seven, was the only one Joseph would allow to be with him while he worked on the church.

The Mitchell's Presbyterian Church has been the subject of important restoration work and research. Below is a pamphlet on Joseph's work.

One of the lesser known works of Joseph Oddenino can be found at the Masonic Lodge in Madison, Virginia. The painting on the ceiling is called the "Queen of the Angels" and demonstrates another aspect of Joseph Oddenino's range of talent. These photos were taken by Jane Oddenino, great-granddaughter of Joseph, in 1998: